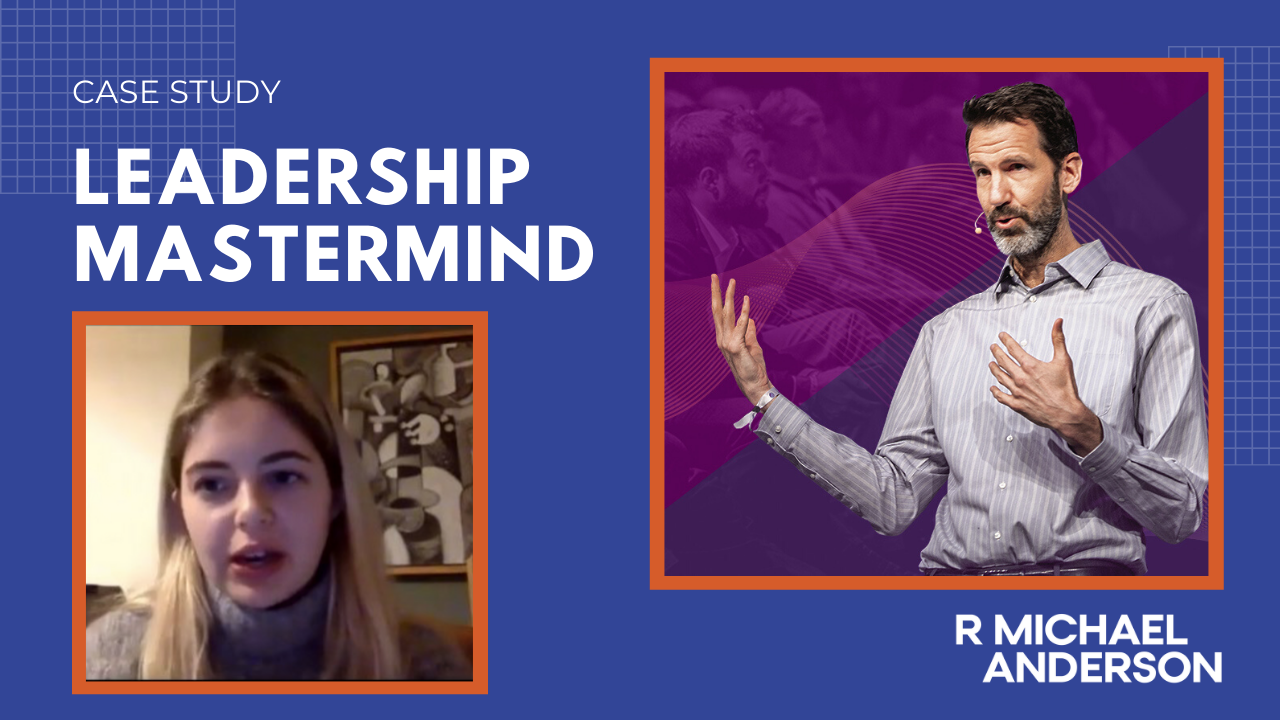 I first met Alice Fisher when I delivered a workshop to high-potential leaders at Salesforce.

Even though she was early in her career, she made an impression on me because she was driven and motivated and was very clear that she had her sights set on becoming senior leader.

The biggest problem is she didn’t know how she would get there.

One of the things I want to be in the future is a senior leader. Going through university and going for my first three or so years at work, no one teaches you how to be a leader.

It’s difficult, and almost impossible, for someone relatively young to know how to become the confident, influential, powerful leader they are yearning to grow into.

And like many, she was frustrated, lost and confused.

After all, how was she supposed to reach her personal and career goals without a plan or the proper skills?

I joined the course because I was feeling quite lost with knowing what sort of skills and habits I need to learn to be a good leader and set myself up for success. I’ve always been apprehensive because I didn’t know where I would learn these skills and tools. I don’t want to be a leader first and do a bad job.

She shared with me a few different areas that her lack of knowledge was holding her back.

First, she was put in charge of an initiative where she had to lead a team. The project was falling behind, she knew they should be performing at higher level, and she was really lacking the knowledge of how to hold people accountable.

It really weighed on her that she was letting her company and her team down.

Second, she would be in customer and internal meetings where she told me she would sort of hide. She often felt out of her depth, intimidated, and like an impostor. She wouldn’t speak up even if she had something valuable to say.

Third, she really wanted to jump start her career, so she would go to two networking events. The issue is, that they weren’t moving her forward.

Even though she was investing this time, they felt like a waste. Even though she would meet one or two people there they weren’t the type of people she needed to get connected with.

All this was adding too her frustration and worry that she was falling behind in her career.

Luckily, she contacted me after the workshop that she attended and asked what her next steps should be.

After a brief conversation, she applied for and was accepted into my Transformational Leadership Course.

This is my flagship class where I teach people how to not just be a manager, not just be a boss, but to transform into a true leader.

As a result, she ended up with the complete leadership toolkit, something she can use not just now, but as she keeps progressing in her career.

In just a few weeks her knowledge and skill said was paying massive dividends.

She now has a road map for her entire career. This helps her have confidence that decisions she makes around her job are all strategically aligned and are going to keep her moving forward.

She’s on track to achieve her goals, dreams, and vision so much faster then she would without a strategy.

The amount of stress this takes off her, as well as the confidence that she’s moving in the right direction, frees her up to focus on the important things.

I’m going in that I want to, rather than being short-minded and getting myself dug in tunnels of things that I actually don’t want to do in the future. Before I was lost in a forest and now I have a map and I know where I want to go and how I need to get there, as well as the different habits and skills I need to keep making progress.

Also she is an active participant in meetings with the confidence that what she has to say is valuable.

When she is in these customer or internal meetings, no matter who else is in the room with her, whether it’s an entry level person or somebody at the VP or C-level, she shares which she has to share, and in return they see her as her strategic, influential, key player.

And the greatest thing, she’s loving it.

She’s had so much to share and so much value to add, the really exciting thing she said is being a key part of the team and making a difference.

I got rid of all those nerves so I can come into an important meeting and literally be strategic. I’m a lot more focused in the meetings, and I’m not scared anymore to put my hand up and say my opinion.

Then the strategic networking process is giving her the powerful network everyone needs. After all, when you’re in a larger organization, the contacts you have and the people that know you are going to fast track your career.

She proactively reaches out to the power players in the organization and is forming tight relationships with them. In a very short time she’s really elevated her status in the company.

That’s how these tools, skills and habits pay immediate dividends.

This is just a small sample of what Alice has gotten out of the course.

She’s also learned things that are going to support her and promotion after promotion, role after role, and when she makes it to the to the top, she’ll thrive in that position too.

I’m proud of all my students, but I’m especially proud of Alice, because she had the foresight and intelligence to invest in her career early. After all, leadership skills are the best long-term investment you can ever make in your career.

Interested in learning how you can achieve the same confidence, strategic leadership, and team inspiring gains that Alice has?

Book a call with one of my professional Leadership Mentors here: https://tiny.cc/mentorcall

There’s no charge for the call, and you’ll be working with someone who will walk through where you’re at as a leader, get clarity on where you want to go in your career, and come out with a step-by-step gameplan to getting there.

If you’re dedicated and driven to keep growing both in your job and yourself, booking a call with my team is the single strongest thing you can do. Click the link now and get started: https://tiny.cc/mentorcall