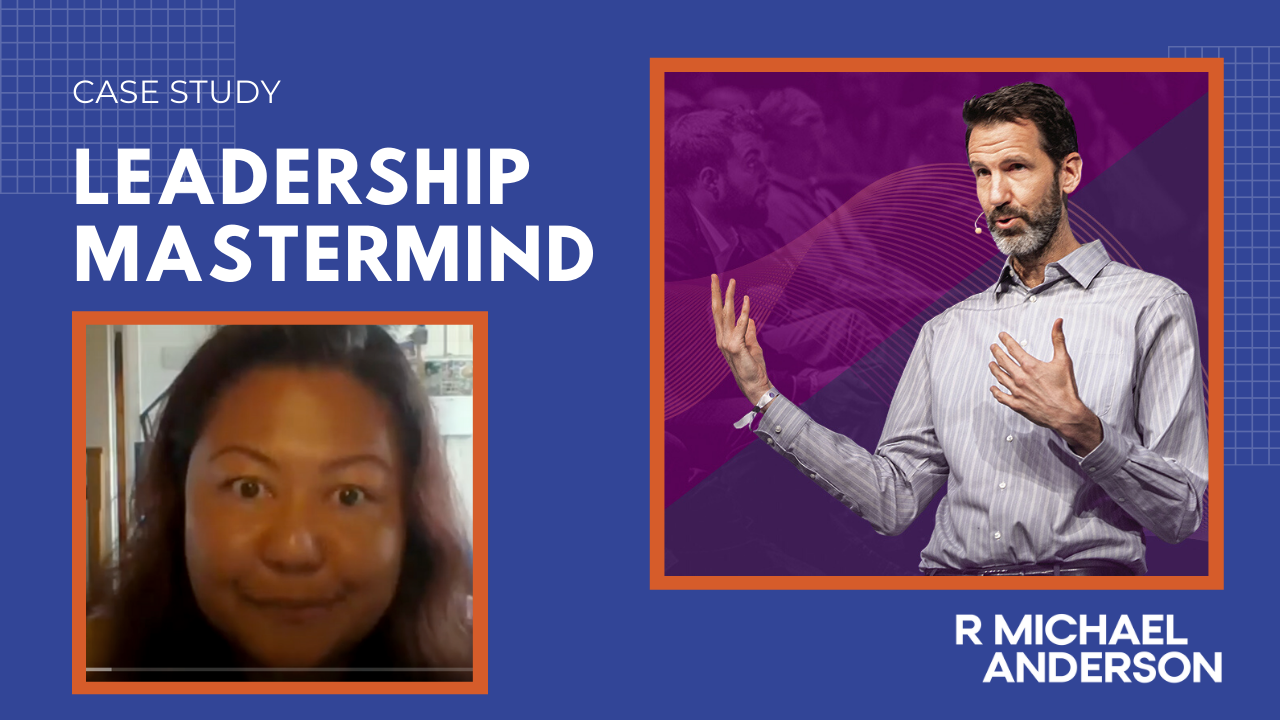 I have a fantastic client called Issy.

She is hyper-intelligent and has this incredible presence about her. Every room she steps in, she lights up with her personality and vibrancy – even virtually!

Despite this strong presence, Issy initially reached out to me because she was struggling at work.

She had been with the same global company for more than 20 years but kept hitting glass ceiling after glass ceiling.

She wasn’t progressing in her career.

Her confidence was failing.

Her self worth was suffering.

She was in a rut.

Whenever she asked for feedback to explain the lack of progression, she would face responses like, “It’s not the right time for you; this isn’t the right position.”

After such a long time working at the same company and hitting these consistent brick walls, she decided to take action.

“I was thinking to myself SURELY this is not the case, there must be something I needed to do to improve – something is missing I need to be aware of to progress.”

Issy came across my ads on Facebook. From there, she bought my book and booked a complimentary call to talk about her situation and then decided to join my mastermind course.

Joining the Mastermind was a choice and investment that Issy wanted to make in herself to see if she could change her life.

“I decided to join the Mastermind. I wanted to work on my confidence, to work on me and figure out what I could do to get past this glass ceiling.”

Issy is a glass half full kind of person. She already knew that there is always a way to get past obstacles.

A big part of moving forward is often looking inward and seeing the behavioural patterns you have implemented that may not serve you.

“Before the Mastermind, I wasn’t sure of myself. I did not trust myself. On the surface, I did not believe enough in myself to do it, even though I knew that I could deep down.

I was stopping myself from performing in a good way because I was scared of failure.

I was scared that people were judging me.

I was scared that I may not be good enough.

Behind the outward projection of confidence I show the world, I wasn’t confident at all.

I wasn’t sure of myself; I didn’t even trust myself or my ability to do things.”

Identifying the reason why you’re protecting yourself is half the battle.

And once Issy realised how she was behaving and why she was able to look at her patterns analytically and change them.

“I wouldn’t put myself forward for the job or the promotion; I would already take myself out of the running. If there were even an inkling of doubt that I would not be able to do it, I’d automatically go, ‘No, I can’t do this.’

I was blocking myself before I even tried..'”

Instead of trusting herself, her instincts and her power, Issy was taking a step back and waiting for someone else to put her forward. Her fear of failure and lack of trust in herself and her abilities was getting in her way.

“I would step back or wait for somebody to push me forward rather than pushing myself forward. I was relying on other people to do the pushing for me.”

So is this still Issy’s story?

Is she still waiting for someone else to validate her skills, to push her into a dream job?

Issy learnt to go out and get what she wants on her own.

She found her self worth.

She found her confidence.

She found her voice.

Since joining the Mastermind and implementing the tools and techniques she discovered, Issy now has a new job within her company – in a completely different department to her background.

“I got the job! And I’m loving it and thinking to myself, why didn’t you do this before? You could have been here way before now!”

It wasn’t an easy journey; she worked hard and had her doubts about joining… This was not her first leadership course.

“There was a niggling doubt at the back of my mind… Oh, well, this is like any other training course. I have been in several training courses within my company, and I have read many books – what am I going to learn from this that I didn’t learn from anywhere else?”

What tipped the scales for Issy and convinced her that this was the right move for her was that she booked a complimentary consultation with me.

“Michael resonated with me, and I felt this connection with him. I just knew that he would be able to help me. I trusted that this would be something different and that it was going to help me progress.

And wow, was I right! I’m so glad I made that decision.”

What made this Mastermind stand out from any training Issy had embarked for before was the emphasis on self-development.

“I learnt more about myself and believing in myself with the techniques that you have taught us. It felt silly to start with, and I struggled with the affirmations and meditations. But persevering was life-changing.

I learned how to respect and value myself. From there, my entire behaviour has changed. I go for things even though I think, ‘I might fail in this'”.

The blend of psychology and theory in the Mastermind allowed Issy to find new layers of understanding to lead her team and approach new challenges.

Issy learnt how to transform her outlook.

With her tenacity, hard work, and commitment, she transformed how she perceived failure and her attitude towards herself, life, and profession.

“You taught me to look at failure differently.

You taught me to look at situations differently that even if I fail, it doesn’t matter; I still move two steps forward.

What changed for me is that I went for interviews for roles I would never have dreamed of applying for before the course.

The investment Issy made in her future by reaching out and joining the Mastermind had tangible, life-changing results in only four months.

She went from being frustrated in a job with no progression, struggling with low confidence and self-worth, to having faith in herself to go for the job that she wanted… nailing the interview and taking a job in an entirely different department.

Something the Issy of 4 months ago would never have believed herself capable.

She found her strength.

She found her power.

She found out how to reach her potential.

“So as far as I’m concerned, I think it’s one of the best courses I’ve ever, ever done.”

Do you find yourself in the same position as Issy?

Are you stuck in a stagnant role and don’t know what to do about it?

Check out the link below for details on my Leadership Mastermind.

mastermind
PrevPreviousFounder transforms from “winging it” to a Strategic, In Control, and Confident CEO
NextFinancial Exec. Tranforms into a Confident, Strategic Board Member after Major PromotionNext